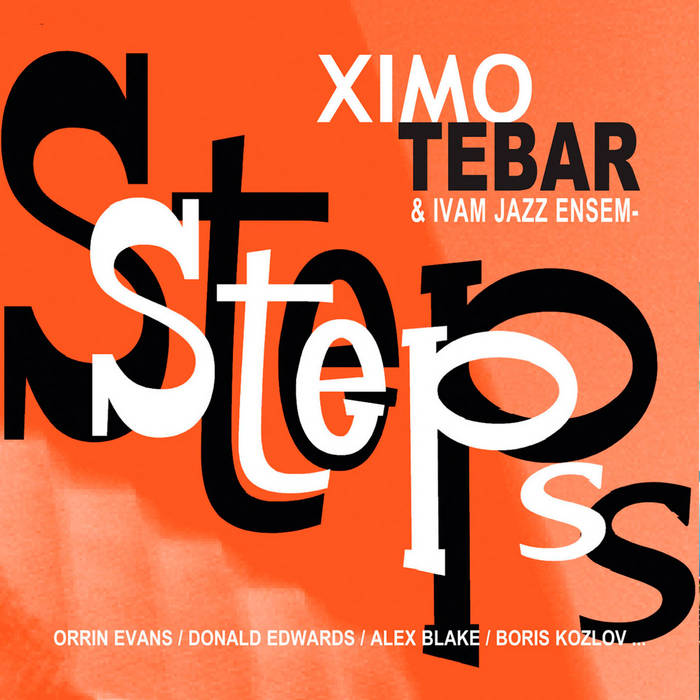 Steps , by guitarist extraordinaire Ximo Tebar, may be his most deceptive yet. At first blush, it appears to channel the funky grooves of latter-day Miles Davis and Marcus Miller . But then, with complex melodic invention and accelerated rhythmic accentuation it soon becomes evident that this music embodies an ebullient sound of surprise. If anything, Tebar channels a star-bright sound with a touch of barely discernable, molten duende and the speed of John McLaughlin , in a sinewy, self-assured elegance that makes him one of a kind. And in this self-assuredness, the guitarist is able to turn his axe into an almost vocal instrument that embarks on its own aria-like sojourns when the need arises. To this extent he slips into a line that began with Charlie Christian and continued from Wes Montgomery to George Benson . His long loping melodic lines often mimic upward flight, while the darting arpeggios are sometimes lightening fast and at other times more languid and brooding.

The record strikes a mature note right at the very beginning. Henry Mancini's theme from The Pink Panther (1963) is a bold move that comes from being self-assured. A standard such as this is rarely attempted on a record, unless the performing artist is one who's cut his chops and paid his dues. Not only does Tebar open his session with a Mancini tune, but he does so at an even more laidback pace, virtually reinventing the time signature. He does no less with a complete reworking of John Coltrane 's "26-2" that becomes a slow, sensuous, and swinging bossa nova, as he scats in accompaniment. Wayne Shorter 's legendary "Nefertiti" is played bolero-like, but with a twisted, Latin flavor, and inhabits a constant, dreamlike state, with Orrin Evans ' Rhodes and Tebar's guitar playing almost bashfully off each other. Herbie Hancock 's "Actual Proof" is deconstructed with a gleefully
boppish time signature, the undulating tones of the Rhodes creating a memorable, svelte background for the guitar and other instruments to enter the fray. But it is Tebar's compositions that create the biggest dent in the memory.

"Four On Six For Wes," is descriptive of another quirky time signature that also captures Montgomery's character as it ascends and descends the fret-board, pulling together a remarkable string of solos from Rhodes and guitar so that it appears the two instruments are creating a new relationship, like the drum and the bass once did with hip-hop. Tebar's guitar is absolutely speech-like throughout his solo, which is quite refreshing. "Zap" is a quieter track by all accounts, while the title track is an unabashedly clever re-write of John Coltrane 's "Giant Steps." It's a perfect end to the session and is also a refreshingly bright musical recollection and doffing of the proverbial hat to Coltrane's sheets-of-sound, as exemplified by the saxophone icon's original. The Spanish Tebar has found many admirers in the US because he is so chameleon-like—a shining example of what Duke Ellington once called the jazz "Sound of Surprise."

ALL ARRANGEMENTS BY XIMO TEBAR
Produced by Ximo Tebar

Spanish jazz guitarist Ximo Tebar, teacher, composer and producer, recreates a flavorful fusion influenced by the classics, the art of methodical virtuosity and daring jazzistic innovation. The result of his extraordinary research work on the fusion of Mediterranean music with jazz has led him to be distinguished as creator of "Son Mediterráneo" ... more

If you like STEPS [Progressive jazz] by Ximo Tebar with Orrin Evans, Jim Ridl, Boris Kozlov, Donald Edwards, Alex Blake..., you may also like:

Bandcamp Daily  your guide to the world of Bandcamp