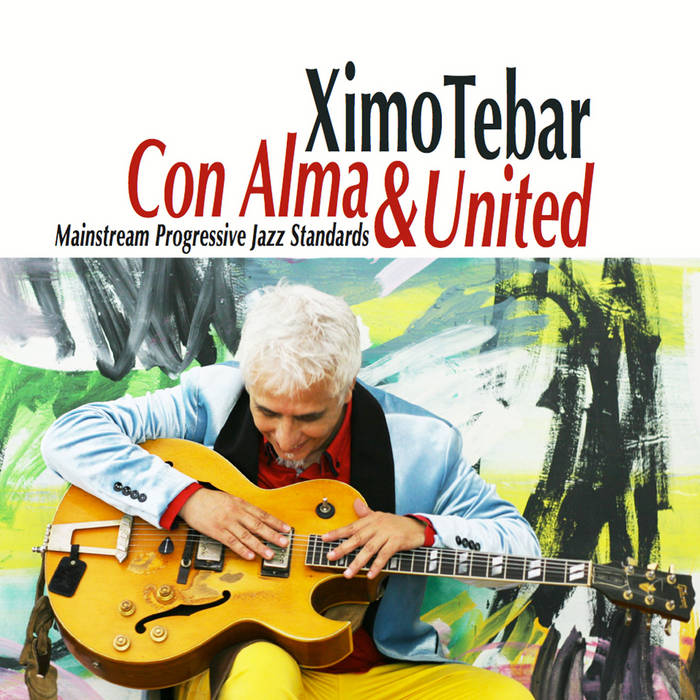 FROM SON MEDITERRANEO TO MAINSTREAM PROGRESSIVE JAZZ. THE CONCRETION OF THE ABSTRACT: MUSICALLITY AND RHYTHM

Ximo Tébar’s new album “Con Alma & United” takes us back in time to his progressive period, when the guitarist was living in the states, but with the inclusion of a new ingredient: the incorporation of Son Mediterráneo gestures such as slightly suggested flamenco cadences, bright sounds and strong rhythms within the pure jazz and contemporary language.

If you have the privilege of being in the studio/house of the Valencian guitarist Ximo Tébar, and to have access to his tracks recorded in his mac. You can find surprises like “Pierre Boulez” playing Caravan. His records are built and rebuilt with numerous layers that allow different listenings. Raul d’Gama Rose, a critic from All About Jazz New York, defined this characteristic of Ximo Tébar as “Sound of Surprise”. Well, I have had this privilege and I can tell you that this new Tebar’s work is full of "Surprise Sounds" throughout the eight famous standards that the guitarist makes his own in this recording.

In this new record we are witnessing the gestation of a new sound based on recreation, always peculiar and progressive of the jazz standards, which brings us back to his best albums in this line: Eclipse (2005) and Steps (2008), uniting "in body and with soul ", and at the rhythm of pseudo-bulerias, the standards "United " by Wayne Shorter, (with the collaboration of Jorge Pardo) and "Con Alma" by Dizzy Gillespie, (with the collaboration of Arturo O'Farrill), a new twist to the career of our most international jazz guitarist: a new fusion that takes us from the "Son Mediterráneo" to the Progressive Mainstream.

The impressive band that Ximo has set up for this project only guarantees, as usual, the quality and exquisiteness of this great new production full of brilliant interpretations of both the innovative arrangements of the eight standards and the soloists developments with virtuosity, energy, interaction and rhythmic groove in abundance.

To finish I want to mention the lines that illustrate the cover and the arts of the CD, expanded by the spine and back cover of it: these are fragments of the large format canvas in mixed technique of the painter from Albalat de la Ribera (Valencia, Spain) Rebeca Plana. She made this for the occasion and its titled as the Cd. The energy of the broken strokes, the constructivism and the light that emanate their colorful contrasts take us back to the, in principle, so different aesthetics of the guitarist, but possessor, in the background, although not in the form, of an expressionism that emanates from the same place, the concretion of the abstract: musicality and rhythm.

ALL ARRANGEMENTS WRITTEN BY XIMO TEBAR

Spanish jazz guitarist Ximo Tebar, teacher, composer and producer, recreates a flavorful fusion influenced by the classics, the art of methodical virtuosity and daring jazzistic innovation. The result of his extraordinary research work on the fusion of Mediterranean music with jazz has led him to be distinguished as creator of "Son Mediterráneo" ... more

Bandcamp Daily  your guide to the world of Bandcamp